Cookies help us deliver our services. By using our services, you agree to our use of cookies. More information

On the wiki, Sean has a different name than his game counterpart(s) (prior to Generation VI) and is an upstart trainer from Eden Town. Being the first and only child of the Professor, Sean has always been fascinated with Pokémon, even from a young age.

He has admired his father and his late cousin, from afar until the age of ten, where he started his journey with Fennekin, a pokémon he asked his father for specifically. He has the goal of becoming the next Pokémon League Champion, and as such defeat the current champion.

He also has the goal of defeating Hope and his Frontier Brains in the Hora Battle Frontier. It was later revealed that he has the ability to communicate with Pokémon telepathically, reading their hearts using Aura.

He traveled alone until RC004 when he met up with Riley, his childhood friend; he was later shown to be traveling with Lola after her introduction in RC007.

He has heard the stories of Silus and Jason Reid and their exploits prior to his trek and hopes to meet them in battle. Due to his natural skill with training and befriending Pokémon, his father has granted him the title of "The Trainer" marking him as one of the Pokédex Holders, a title he takes pride in.

A happy go lucky kid, full of energy, Sean is always on the move, often not thinking about where to go next, only that he has to get there asap. He is often running people, Pokémon, or obstacles over as he runs from place to place, always looking for a new Pokémon companion. He is one of a kind and his father has high hopes for his son, but is scared due to his sons knack of getting into trouble.

Aura-based Heart Reading: Born with this strange ability, Sean is able to sense and to a limited degree utilize Aura. While he is still in training to control this energy, he has a strange link to any Pokémon who also uses this energy however using this ability extensively drains him. As an extension of his Aura powers he is able to read the hearts and emotions of Pokémon. This allows him to become friends with stubborn Pokémon and even Legendary Pokémon.

Xtransceiver: (Japanese: ライブキャスター Live Caster) is Sean's main way of communicating with other trainers and his parents. His is modeled black and white and he wears it on his right arm. 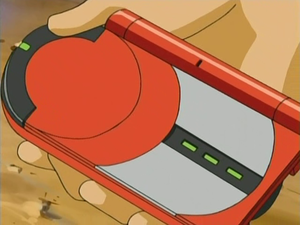 Pokédex: Given to him by Professor Changi, Sean has a pokédex which allows him to record and classify any pokémon scanned. He uses this to discover facts about pokémon he's never seen before. It is colored red and black, it is stylized after the Sinnoh model. His Pokedex has the added feature of being able to scan for Aura, allowing for non users to see the wave lengths, this was added by Changi as he knew about his son's gift from a early age. Unlike others who started before him, his Pokédex has data on the different Pokémon from the Kalos Region, due to the fact that he started with a Kalos native Pokémon.

Berries: After meeting up with Riley a Pokémon Breeder, Sean was given a myriad of Berries to feed to his Pokémon. He has a few different types ranging from Oran Berries to Sitrus Berries.

Mega Ring: This item was found by Sean after his encounter with William and his Mega Latios. Following the defeat of the legendary Pokémon it was flung from its original owner and lost in the woods until Sean discovered it. It is in the shape of a ring, which both trainers have worn on their ring fingers (albeit on the opposite hand) and when in the presence of a Mega Stone, it allows for Mega Evolution.

This listing is of Sean's known Pokémon. They change often depending on his preference;

Sean does not keep the same party at all times, rather he alternates between those he has recently captured and those stored with his Father. Some of his captures occur off screen, as well as some evolution's.

This is a listing of all of Sean's known badges;

These special episodes cover Episode RC009-RC033, and will be told in the same manner as Pokémon Origins. It will cover Sean obtaining his remaining Gym Badges and the capture and or evolution of his team members before the Caspia Conference. It will also delve into the shared history of Sean's Cousin Austin and the Rocket Agent William.

Retrieved from "http://pikafanon.shoutwiki.com/w/index.php?title=Sean_Changi&oldid=2671"
Categories:
This page was last edited on 2 June 2016, at 02:04.
This wiki is hosted by ShoutWiki • Staff Blog
Now hiring • Contact us or report a bug
Privacy policy • About Pika Fanon • Terms of use • Piwik optout • Mobile view